Dr. Charles Asher Small gave a keynote address at the historic UN Geneva Conference, hosted by the Muslim World League’s Initiative for Protecting the Youth from Extremist and Violent Ideologies. Charles spoke on “Confronting Antisemitism as the Key to Eradicating Violent Extremism”. Assessing how antisemitism – a European phenomenon – was imported and fused with versions of Islam by the Muslim Brotherhood, its offshoots, and the Iranian Regime, and how ideological forms of antisemitism are associated directly to Nazism. He also stated that the demonization and irrational focus on Israel and Zionism, is responsible for enabling the brutality of reactionary extremists to wreak havoc of genocidal proportions in Syria and throughout the Islamic world, endangering the youth and exposing them to more extremist and violent ideologies.
At the United Nations in Geneva, photos of Dr. Charles Asher Small, Executive Director, ISGAP, with Dr. Muhammad bin Abdul Karim Al-Issa, Secretary-General of the Muslim World League, and Senior MWL Advisor Raad Fanary. Dr. Small with Shawki Ibrahim Abdel-Karim Allam, the Grand Mufti of Egypt. 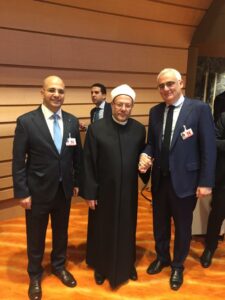