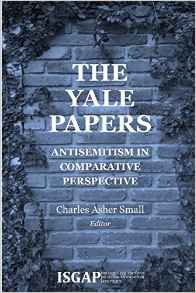 Between 2006 and 2011, the Institute for the Study of Global Antisemitism and Policy (ISGAP) established and sponsored the Yale Initiative for the Interdisciplinary Study of Antisemitism (YIISA), the first academic research center dedicated to the study of antisemitism based at a North American university. During its mandate, YIISA hosted a successful graduate and post-graduate fellowship program, research projects, and a high-level interdisciplinary seminar series at Yale University. The present volume – The Yale Papers: Antisemitism in Comparative Perspective – includes a selection of the papers presented in the framework of this seminar series, as well as several other working papers, conference papers, and lectures commissioned by or submitted to YIISA by eminent scholars and researchers from around the world. In addition to providing a fascinating overview and scholarly analysis of some of the many facets of historical and contemporary antisemitism around the globe, this volume stands as a solid and incontrovertible testament to the abundant – and, above all, productive – academic activity that characterized YIISA’s truncated tenure at Yale University.