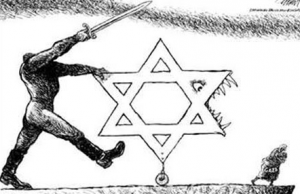 Focusing on the Belgian francophone media’s coverage of the 2014 Gaza conflict, this paper traces the specific ways in which news reporting on the Middle East manifests an inherently anti-Israel bias that draws upon a Western tradition of antisemitic figures and motifs.

The Belgian media’s systematically negative predisposition toward Israel exhibits a “deformation” concerning events in the Middle East; that is, the media remains unable to consider the Israeli–Palestinian conflict outside of the basic narrative in which innocent civilians, especially Palestinian children, are being targeted by bloodthirsty Israeli soldiers whose actions allegedly constitute a act of genocide. The media’s pro-Palestinian tendency, which results in part from the hyper-mediatization of the Middle East and the professional, economic, and cultural incentives that accompany it, habitually relies upon antisemitic stereotypes and conventions—in particular, the myth of Jews as child killers and the narrative of the “Massacre of the Innocents”—in order to reinforce its central storyline. Yet even as it does so, deadly inter-Muslim conflict and shocking images of Islamist savagery are sanitized and purged so as not to discomfort readers and viewers accustomed to an anti-Israel perspective.

Given the Belgian media’s anti-Israel bias, it is now urgent to investigate and question the professional ethics of journalists, and to call for the media to think through and contextualize its reporting on events in the Middle East. While some Arab intellectuals have already begun to publicly detach themselves from solidarity with Islamist resistance movements, Belgian media does not report on the Islamofascist nature of Hamas, evident in their founding texts as well as in the antisemitic accusations they routinely make (e.g., the association of Jews and ritual murder). Instead, journalists abstain from reporting in which the State of Israel is not treated as the perpetrator.

The paper concludes with two appendices that provide ample supporting evidence of the Belgian media’s reflexive incrimination of Israel: first, an overview of the coverage of the 2002 Battle of Jenin, in which allegations against Israel were reported without question or context; and second, a collection of visual documentation from Le Soir’s reporting on the 2014 Gaza conflict.