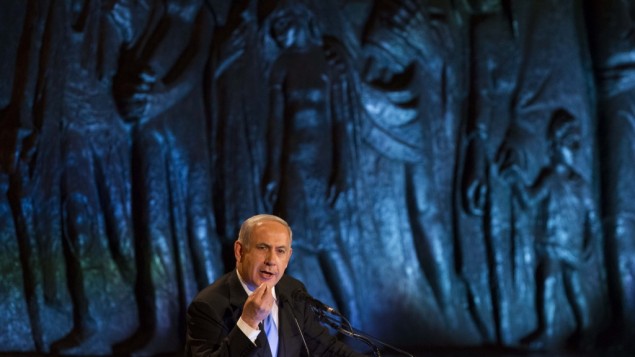 Israel will defend itself with its own forces and prevent a Holocaust from ever happening again, Prime Minister Benjamin Netanyahu said at a ceremony marking Holocaust Remembrance Day Sunday night, echoing a familiar refrain that the Jewish state won’t tolerate an Iranian nuclear weapon.

President Shimon Peres, also speaking at the ceremony, lamented the fact that anti-Semitism still persists, and that the Holocaust “is still with us.”

The two addressed a gathering that included many of Israel’s political and religious leaders, as well as the former prime minister of Britain, Tony Blair, who is currently the special envoy of the Middle East Quartet; and the Canadian Minister of Foreign Affairs, John Baird.

“Iran is warning openly about its intentions to destroy us and is working with all its might to carry it out,” Netanyahu said. “The hate against Jews hasn’t disappeared, but has morphed into a murderous hate against the Jewish state. We won’t leave our fate in the hands of others, even the best of our friends.”

“Here, and today, I promise — there will never be another Holocaust,” he added.

Alluding to the recent figures published that there are now more than 6 million Jews in Israel — the same number estimated killed in the Holocaust — Netanyahu said that ”this is our victory. This is our consolation. This is our pride.

“The rebirth of the Jewish people is tied to the battle against those who wish to destroy us,” he continued. “Our ability and willingness to defend ourselves, that is what enabled the establishment of the Zionist enterprise and that is what ensures our continued existence and our future.”

Peres, on the other hand, lamented that Jews the world over were still experiencing the same hate that led to the systematic murder of the Shoah, saying that skinheads, Holocaust deniers, and attempts to reestablish the Nazi party prove that “to our shame, there yet remain those who have not learned a thing.”

“The civilized world must ask itself, how in such a short space of time after the crematoria were extinguished, after the terrible death toll that the allied powers endured to put an end to the Nazi devil, is it still possible for the leadership, like that of Iran, to openly deny the Holocaust and threaten another Holocaust,” he continued.

Calling the 74 years since the official outbreak of World War II “more biography than history,” Peres said the greatest horror known to mankind “resonates as we step on the stones of the ghettos, floats like a ghost in the barracks of the camps, cries from the prayer shawls, the hair, the shoes that we see with our own eyes.”

“The Jewish people are a small nation in number, but large in spirit,” Peres said. “That spirit cannot be burned in the ovens. From the ashes of the Holocaust rose spiritual redemption and political rebirth. We rose and we built a state of our own.”

The theme for this year’s ceremony at Yad Vashem was Defiance and Rebellion during the Holocaust — 70 Years Since the Warsaw Ghetto Uprising. Of those who participated in the revolt, Peres remarked: “They were few, but their heroism remains an example for many — now and forever. Today, we salute their bravery with the flags that fly freely.”

The president mentioned Peretz Hochman, one of the last survivors of the Warsaw Ghetto, who passed away last week, two weeks before his 86th birthday.

“The history of the Holocaust is not just a lesson from the past, it is also a guide for the future,” Peres said. “That we will know how to defend ourselves against dangers… that we can rely on ourselves. That we must maintain our moral legacy, which withstood even impossible situations.”

He added that “we must ensure that mankind never again loses its humanity… that every person will have the right to be different… different and equal.”

Netanyahu opened his remarks by referring to the recent spate of attacks by younger people against the elderly, including some Holocaust survivors. He vowed to see to it that the perpetrators are punished as severely as possible.

“We are committed to the safety of our elderly citizens, and we have an extra obligation to those who survived the Holocaust,” he said. “The Holocaust survivors are the symbol of our rebirth. Those who went through the Holocaust deserve to live the remainder of their days in peace and comfort.”

Written by Asher Zeiger and the Times of Israel Staff

Originally published on April 7, 2013 on The Times of Israel