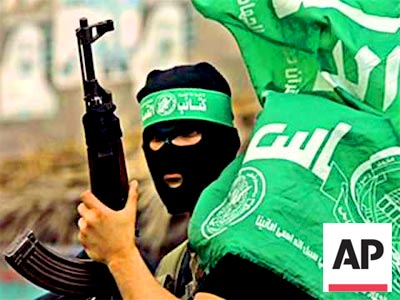 First they came for terrorism, then it was the war on terror, and now it is Islamism.

It seems to have started during the spring of 2009, when Homeland Security Secretary Janet Napolitano first appeared in her new role at a congressional hearing.

Some close listeners of her testimony realized that while Napolitano was head of the U.S. government’s cabinet-level department created specifically in response to the terrorist attacks against this country on September 11, 2001, the word “terrorism” never crossed her lips.

The English online version of the German newspaper Der Spiegel interviewed Napolitano shortly after her maiden congressional speech, and asked her about that glaring inconsistency.

Napolitano explained that by substituting the phrase “man-made disaster” for “terrorism,” the Obama administration was demonstrating “that we want to move away from the politics of fear.”

In the four years since the word “terrorism” was dropped from the play list, several other terms or words have been placed on the “no speak list.”

For example, during the George W. Bush administration the U.S. was fighting something called “the war on terror.”  But “terror” and “war” are both such negative terms that the Obama administration gave it the heave-ho,  replacing it with “overseas contingency operations.”

This week a new change in parlance was introduced.  Although the U.S. government is not responsible for this change, it will have at least as enormous an impact on how we speak as if it were ordered from the White House, probably even greater.

The Associated Press Stylebook is an extensive compilation of standardized terminology, abbreviations, capitalizations and other information journalists use to convey information.  It is the most widely-used resource for journalists, and therefore the way in which it chooses to define words or concepts has an enormous ripple effect on the public’s understanding of many subtle and not so subtle issues.  The Stylebook also plays a major role in determining when, whether and how new words or concepts enter the general lexicon.

For example, in the 2010 edition of the AP Stylebook, a new section was added on social media, for the first time addressing how “Twitter” and “Facebook” can be used by journalists and therefore how it will be introduced to consumers of news.  That new section also was responsible for officially transforming the word website from a two-word phrase to one word.

From a report in Politico on Friday, April 6, we learned there’s more change afoot.  While there has already been some discussion of the change in reference to “illegal aliens” to “undocumented workers,” another change has thus far received less attention.  This changed has been traced directly to campaigning by the Council on American-Islamic Relations against the use of a term it described as pejorative.

In a January CAIR press release, the organization which describes itself as a Muslim civil rights group, but which government officials have described as a front-group for Hamas, was unhappy with the way the AP Stylebook defined “Islamist.”

The AP added the term “Islamist” to its Stylebook in 2012.  The term was defined:

Islamist—Supporter of government in accord with the laws of Islam. Those who view the Quran as a political model encompass a wide range of Muslims, from mainstream politicians to militants known as jihadi.

CAIR found that definition objectionable, and urged the AP to drop the term from its Stylebook.

The AP went even further.

Although “Islamist” is still a defined term in the AP Stylebook, reporters are now admonished not to use it to mean something objectionable.  The entry for “Islamist” now reads, with emphasis added by Politico:

An advocate or supporter of a political movement that favors reordering government and society in accordance with laws prescribed by Islam. Do not use as a synonym for Islamic fighters, militants, extremists or radicals, who may or may not be Islamists. Where possible, be specific and use the name of militant affiliations: al-Qaida-linked, Hezbollah, Taliban, etc. Those who view the Quran as a political model encompass a wide range of Muslims, from mainstream politicians to militants known as jihadi.

CAIR issued a press release Friday, April 5, welcoming the change by AP, and calling the Stylebook revision a “step in the right direction.”

Originally published on April 6, 2013 on TheJewishPress.com