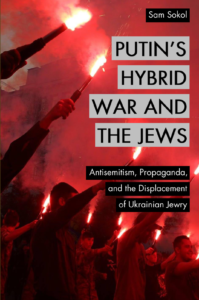 Drawn from journalist and ISGAP Research Fellow Sam Sokol’s reporting during the first years of the Donbas War, Putin’s Hybrid War and the Jews chronicles the collapse of Jewish life in the regions of eastern Ukraine occupied by Russian-backed separatist militias in 2014. Based on extensive research and interviews and told through the eyes of refugees, politicians, soldiers, and aid workers, this book is a rich account of both the ravages of armed conflict and the Kremlin’s attempts to weaponize antisemitism as part of its hybrid war against Ukraine. It is a highly relevant read in a time of both rising antisemitism and widespread disinformation.

Praise for Putin’s Hybrid War and the Jews

“With antisemitism on the ascent around the world and a particularly xenophobic form growing in Eastern Europe, Sam Sokol’s Putin’s Hybrid War and the Jews is especially timely. There has relatively little reporting on the threats to the Jewish community in Ukraine and what has been reported on is often misleading. This book pushes back on the propaganda and reports in great detail about the facts on the ground and how Putin’s war in Ukraine plays into the larger narrative of Eastern European antisemitism.” –Ira Forman, Former US Special Envoy to Monitor and Combat Antisemitism

“Sam Sokol’s Putin’s Hybrid War and the Jews provides remarkable detail on the dynamics of historical memory in revolutionary Ukraine, and how these dynamics affected the lives of thousands of Ukrainian Jews. The stories of the everyday people who were caught in the grips of a remarkable historical moment, and the ways that moment reflected both changes to and the reestablishment of historical prejudices in Ukrainian society, will serve as an important basis for future work. More important, they offer us a glimpse into the contemporary challenges of addressing and minimizing the social and political roles played today by antisemitism and historical memory of the past.” –Robert Williams, Chair of the Committee on Antisemitism and Holocaust Denial, of the International Holocaust Remembrance Alliance

“Sam Sokol takes us on a journey that is both historical in scope and personal in nature, and Putin’s Hybrid War and the Jews is a page turner, uncovering a poignant and important chapter in Jewish history.” –Sarah Tuttle-Singer, The Times of Israel

“The story of Ukraine’s war battered Jews, as told in this timely and important book Samuel Sokol, transcends narrow ethnic interest and provides wider lessons that shed light on both Russia’s hybrid war strategy and the politics of memory in the countries of the former Warsaw Pact. He has succeeded in telling an engaging and fluent story of sweeping impact through the eyes of the everyday people who bore witness to Europe’s latest conflagration. It is an invaluable contribution.” –David Patrikarakos, Author of War in 140 Characters

“Sokol has written an intelligent and well-informed first-hand account of the current conflict in Ukraine, with particular attention to the situation for its Jewish minority. Based upon years of extensive reporting from the region, this is as much an inquiry into the present conflict as a commentary on the complex history of Ukrainian-Jewish relations. At a time, and in a region, where history is legislated and government agencies are tasked with rehabilitation of the legacies of ultranationalist groups, including those with a brutal legacy of anti-Jewish violence, Sokol’s dispassionate and even-handed inquiry of the current conflict is essential reading.” –Per Rudling, Lund University