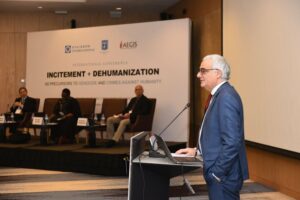 On Monday, February 3, Dr. Charles Asher Small had the honor of representing ISGAP in Kigali, Rwanda, at the international conference on Incitement + Dehumanization as Precursors to Genocide and Crimes Against Humanity. The occasion marked 75 years since the liberation of Auschwitz and occurred 25 years after the 1994 genocide against the Tutsi.

Dr. Small’s lecture entitled, “Holocaust-denial and Incitement to Genocidal Antisemitism: Political Islam and the Acquiescence of the ‘West’”

The Conference was sponsored by B’nai B’rith International, AEGIS and the State of Israel.