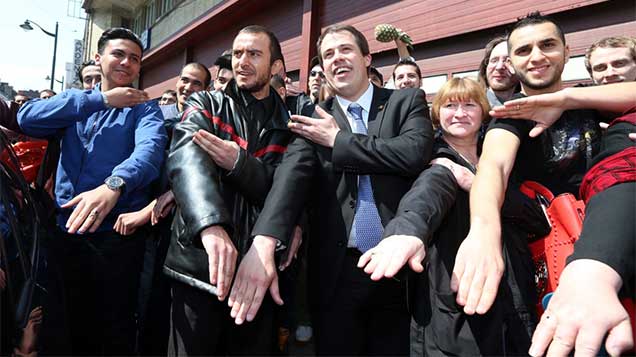 By Dr. Joël Kotek May 26, 2014 – The Jews remain the main target of hate speech and physical violence in Belgium. In our country, the myths – not the facts – are stubbornly maintained. As regards racism, our “recognized experts” on the extreme right have been announcing the death of antisemitism for almost ten years, only to highlight the (inaccurately named) phenomenon of Islamophobia. This dual thesis of the gradual disappearance of antisemitism and the designation of Muslims as the new Jews has become a Gospel-like truth. So, we were informed in April 2014 on Télé-Bruxelles, the Secretary-General of an important anti-fascist website prided himself on having “relativized the antisemitic acts in a general way,” while a Professor at Liège University minimized Dieudonné’s antisemitism. From Brussels to Toulouse, we would like to be able to believe them, but they are wrong, as the slaughter at the Brussels Jewish Museum tragically reminded us. Once again, people were murdered in cold blood just because they were believed to be Jewish.

These heinous murders demonstrate over and over again that even if Jews no longer suffer from social discrimination, unlike immigrant populations, they remain to this day the main target of hate speech and physical violence in Belgium, as they are too in France or the United States. In France, which Pascal Boniface describes as gangrened by the Zionist lobby, the chances of a Jew being the object of physical aggression with racist character is two hundred times greater than the probability of a Muslim being the victim of a comparable act. In the United States, Jews are also the number one religious target. In 2012, the FBI identified 674 antisemitic incidents in the United States, representing nearly two-thirds of all incidents classified as anti-religious. The Belgian statistics do not contradict this trend, even though Jews account for only 0.3 % of the total population.

For more than thirty years, and with few reactions from our opinion makers, leading Jewish figures (Joseph Wybran), Jewish schools, synagogues and now Jewish museums are targeted amid a silence that borders on social and political neurosis.

Because the new antisemitism is no longer located essentially on the extreme right, but is spread across many ideologies and is syncretic. New antisemitism and/or radical anti-Zionism is resolutely red-brown-green. Dieudonné, Soral and Laurent Louis are certainly antisemitic but are also pro-Palestinian, anti-American, third-world oriented and even Islamophile, a weltanschauung certainly too complicated and inconvenient for researchers and journalists who are more than ever bathed in an “anti-Zionist, leftist culture,” this terminology being borrowed from the Director of Research at CNRS, Pierre-André Taguieff.

The new antisemitism is now embedded in this strange rainbow alliance, which presents Zionism as the absolute definition of evil. Since the Holocaust, it is obvious that few dare to deploy antisemitic discourse, except for rare exceptions. Because of Nazism, the word has too many bad connotations. The new antisemites, such as Dieudonné and Laurent Louis, have therefore adopted the convenient strategy of presenting themselves as anti-Zionists. Their speech, though allegedly anti-Zionist, is nevertheless antisemitic and recycles many of the clichés that led to the Holocaust. Under the guise of anti-Israeli discourse, radical anti-Zionism is merely a redeployment of traditional antisemitism. Just as traditional antisemites developed the theory of the devilish causality of the Jew as the source of all misfortunes, the “radical anti-Zionists” have forged an image of the “devilish causality of international Zionism,” responsible for all the world’s misfortunes from the suburbs of Paris to Iraq. This image inevitably leads to the killing of randomly selected Jews, obviously innocent, from Toulouse to Brussels and to New Delhi. Radical anti-Zionism, with all its conspiracy theories, is quick to turn any Jew into a potential target. These developments do not simply mean that antisemitism is not dead: they have ensured that it has found renewed vigor within the most disadvantaged sections of our societies. Antisemitism is not residual and has again become deadly, obliging Jews to adopt measures to protect themselves from physical attack or to consider departing to safer havens. Belgium will not benefit from the departure of its Jewish citizens, and there is no need to mention the names of Ilya Prigogine and François Englert, the last two Belgian Nobel laureates, to be persuaded of that fact.

What can be done? Without defending the thesis that the extreme right has definitely deserted Islamophobia to embrace Islam (the extreme and populist right is definitely anti-Muslim), is it not time for our politicians and media to finally speak up and act against this new antisemitic alliance that now embraces radical right, ultra left and Islamist movements? Is it not time for the Centre for Equal Opportunities and the Fight against Racism (CECLR) to fulfill its mandate and use the full force of the law against antisemitic remarks and actions? Its pathological inability to take decisions is simply surreal.