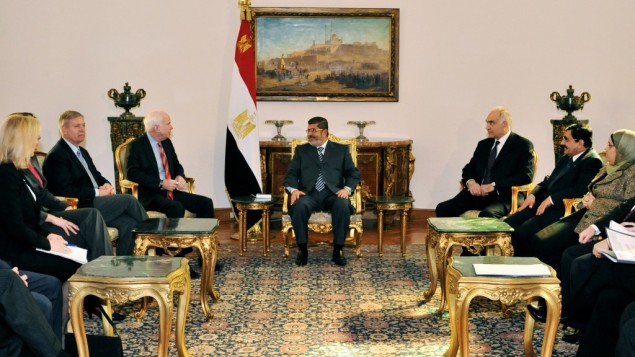 In a conversation with senior US lawmakers, Egyptian president Mohammed Morsi reportedly implied that the Jews control the US media and have distorted comments he made in the past about Zionists being “bloodsuckers” and “descendants of apes and pigs.”

The meeting earlier this month between Morsi and seven US senators deteriorated sharply and nearly derailed after he made the remarks, Foreign Policy magazine reported Wednesday.

Morsi, a member of the Islamist Muslim Brotherhood, came under fire recently after video surfaced of him calling Jews and Zionists “bloodsuckers” and “the descendants of apes and pigs.”

The senators’ meeting with Morsi was partially intended to receive clarification on his earlier comments.

At first, the Egyptian president defended himself by saying he did not harbor negative feelings about Judaism or Jewish people.

He then launched a diatribe about Israeli policies against the Palestinians, Senator Chris Coons (D-DE) told Foreign Policy. “He was attempting to explain himself … then he said, ‘Well, I think we all know that the media in the United States has made a big deal of this and we know the media of the United States is controlled by certain forces and they don’t view me favorably,’” Coons told the magazine’s The Cable blog.

Asked if Morsi specifically named the Jews as the forces that control the American media, Coons replied that all the senators believed the implication was obvious. “He did not say [the Jews], but I watched as the other senators physically recoiled, as did I,” Coons said. “I thought it was impossible to draw any other conclusion.”

The US, which provides Egypt with financial aid, was disturbed by the 2010 video. After it surfaced, the US administration condemned Morsi, with White House spokesman Jay Carney calling the remarks “deeply offensive.”

On January 16, after the US senators visited Cairo, Morsi’s spokesman Yasser Ali said the president had told the lawmakers that his comments referred to “the Israeli aggression on Palestinians in Gaza” and had “been put into context.”

After the meeting, Sen. John McCain (R-AZ), who led the delegation, said he strongly disapproved of Morsi’s remarks about the Jews and Zionists, but decided to “leave it to the president to make any further comments on this matter that he may wish.”

But speaking to The Cable, Coons revealed that the Americans’ conversation with Morsi turned sour after they challenged him on his alleged anti-Semitic sentiments.

“The meeting then took a very sharply negative turn for some time. It really threatened to cause the entire meeting to come apart so that we could not continue,” Coons said. Several senators told Morsi that blaming the controversy over his ostensibly anti-Semitic statements on the Jews themselves was possibly even more problematic than his original comments.

“The conversation got so heated that eventually Senator McCain said to the group, ‘OK, we’ve pressed him as hard as we can while being in the boundaries of diplomacy,’” Coons said.

The rest of the meeting, which covered various other topics from financial aid for Egypt to Syria and Iran, was constructive, the senator said.

Originally posted on The Times of Israel.