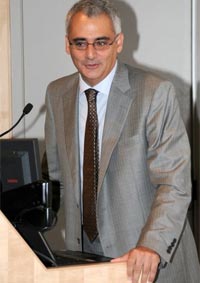 “The Europeans killed six million Jews out of 12 million. But today the Jews rule this world by proxy. They get others to fight and die for them. They invented socialism, communism, human rights, and democracy so that persecuting them would appear to be wrong, so they may enjoy equal rights with others. With these [inventions], they have now gained control of the most powerful countries. And they, this tiny community, have become a world power.”

Those words, as clear an expression of classical anti-Semitic tropes as one could hope to find, were not uttered by white supremacists in an American prison or in a Bin Laden video broadcast from the mountains of the Hindu Kush.

Neither was this quote: “Dear brothers, we must not forget to nurse our children and grandchildren on hatred towards those Zionists and Jews, and all those who support them. They must be nursed on hatred. The hatred must continue.”

Those who follow the anti-Semitic utterances of Muslim leaders will recognize both diatribes.

The first was uttered in 2003 by Mahathir Mohamad, Malaysia’s longest-serving prime minister. Mohamad was not caught unawares by the camera. He was not embarrassed when his words were broadcast. In fact, his warnings about Jewish power and the nefarious Jewish invention of both communism and democracy were delivered from a broad, wood-paneled stage before hundreds of heads of state and ambassadors from 116 countries gathered at the Organization of the Islamic Conference summit in Kuala Lumpur.

As head of state of the host nation, it was his moment in the sun. And in a sweeping speech on world affairs, he made sure to warn the world about the power of the Jews.

The second quote was delivered more recently — and closer to home. It was uttered by none other than Egypt’s current president, Mohammed Morsi, the leader of Israel’s largest neighbor, just two years ago.

The world knows all about these views, which are voiced daily in media outlets throughout the Muslim world, and often make their way into the speeches of Muslim heads of state. But the world shrugs.

And that, according to sociologist Dr. Charles Small, does not bode well for the future of the Muslim world — or for the rest of us.

“There is a crisis in the world,” says Small, an Oxford-educated Canadian-Israeli scholar of anti-Semitism, in a recent conversation with The Times of Israel.

The danger does not come from Islam itself, he emphasizes. The Muslim world is as big and complex as any great civilization.

Rather, “we’re talking about all the variations of radical political Islam, or Islamism, which is a term I prefer to use.” Islamism, a modern political ideology that seeks to borrow legitimacy from Islamic text and tradition, “has at its ideological core a profoundly deadly anti-Semitism. Al-Qaeda certainly has it. And Morsi’s Muslim Brotherhood have had it since their inception, for nearly a century,” Small says.

Iran’s rulers have it, too. Indeed, it has seeped into the mainstream of political discourse in countless Muslims societies.

Whither go the Jews, there other minorities and freedoms will follow.

But hasn’t it all been said before, one immediately wonders. The answer, Small insists, is no.

That naivete has meant a surprising scarcity of academic interest in contemporary anti-Semitism.

“It’s striking. Every research center on anti-Semitism in the world, including in Israel, is run by historians, and it’s not focused on contemporary issues. The fact that our group at Yale was the first research center [on anti-Semitism] in an American university — is itself a research question. Why did it take until 2006 for this to happen?”

The institute had drawn fire from campus organizations, the PLO ambassador, and numerous anti-Israel blogs for engaging in “advocacy,” with a few accusing the institute of open Islamophobia and anti-Arab prejudice.

But the closure drew a torrent of criticism. Walter Reich, former director of the US Holocaust Memorial Museum and a professor at George Washington University who was on YIISA’s academic board of advisers, lamented in the Washington Post that “Yale just killed the country’s best institute for the study of anti-Semitism.”

He called the closure “strange,” praised the institute’s “quality and output” as “superb and wide-ranging,” and explained Yale’s decision as political.

At the 2011 conference, he wrote, “Some [invited scholars] spoke, inevitably, about the fastest-growing and most virulent manifestation of contemporary anti-Semitism — the anti-Semitism in the Arab/Muslim world, in which the tropes of classic European anti-Semitism (such as the allegations that Jews meet secretly to control the world, murder non-Jewish children to use their blood in Jewish rituals and spread disease to kill non-Jews) have been not only adopted but also embellished.

“To be sure,” Reich continued, “some presenters expressed alarm and took an activist stance—as do some presenters at academic conferences on genocide, human rights, women’s studies, African American studies, Hispanic studies, gay and lesbian studies, and nuclear proliferation.”

Harvard law professor Alan Dershowitz complained that the closure was conducted “without even a semblance of due process and transparency,” with the review panel’s report kept confidential even from Small himself.

Whatever problems Yale may have found, said the ADL’s Abe Foxman, “what was required was a concerted effort to work out the problems rather than ending the program. Especially at a time when anti-Semitism continues to be virulent and anti-Israel parties treat any effort to address issues relating to anti-Zionism and anti-Semitism as illegitimate, Yale’s decision is particularly unfortunate and dismaying.”

Small’s supporters believe it was the very attempt to deal with contemporary anti-Semitism, especially in the societies where it is most widespread and least challenged, that doomed America’s first institute of its kind.

For Small, the Yale experience, cut off so suddenly after six years, is a signal that his work is hitting a nerve and challenging a real problem.

“There’s a reluctance among scholars to open up this subject,” he says in his polite, affable way. “This subject is dangerous, embarrassing. It touches on various political interests in international relations that people don’t really want to engage with.”

Engaging with that issue is what ISGAP is all about. Now freed of its Yale anchor, ISGAP has begun to grow.

Over the past year, it has run ongoing seminar lectures at Harvard Law School, Stanford, McGill and Fordham universities. From its base in a small office in Midtown Manhattan — the institute is run on a shoestring budget, with a coordinator on each campus and a small handful of administrative staff in New York — ISGAP has turned its attention to commissioning new research projects. A book of papers will be published in the spring and conferences are planned for next year.

Its modest goal: “To understand anti-Semitism.

“We need to be interdisciplinary and critical. We need people on the ground, who speak Arabic and Farsi, to understand the history and sociology and anthropology” of the societies being studied.

The institute plans to study academia, too. “We need an intellectual approach, to understand philosophically why radical Islam has such acquiescence, how the West aids and abets a social movement such as the Muslim Brotherhood that is [so radically opposed to its values].”

Part of that question must deal with the culture in Western academia, says Small. “You have the politically correct element on American campuses, where people believe that if you start examining anti-Semitism in the Middle East, you’re making excuses for Israel. You have people like [renowned feminist philosopher] Judith Butler, a brilliant woman, gay, Jewish, a serious intellectual, who can get up and argue that Hamas and Hezbollah, because they are anti-Zionist, are part of the progressive movement.”

Butler, who has supported some of the boycott efforts directed at Israel, was criticized last summer for suggesting Hamas and Hezbollah should be understood as “social movements that are progressive, that are on the left, that are part of a global left.” She has said she opposes violence, that placing such organization on the “left” does not necessarily imply support for them, and that she has “never taken a stand on either organization.”

But for Small, that sort of discourse, where a liberal progressive intellectual can refuse to take a stance on supporting or critiquing radical religious organizations that publicly call for the murder of civilian populations, shows that there is something missing from the debate in academia.

“The post-modern critique has some truth and some insights,” he says. “But we also have to critique the critique. We have to get young brilliant scholars to get into the battle of ideas and have a sophisticated analysis of today’s canon and how it affects the rights of Jews around the world, and gay people, and minorities. Are we equipped in a sophisticated manner to understand the rise of political Islam around the world and critique it? Until we have an interdisciplinary, critical analysis of what’s going on, we won’t have any answers, just descriptions of unfortunate situations. As scholars we have a moral obligation to help create policies that will promote human rights and dignity for all. We cannot allow the attempts to silence to prevail — the human cost is just too high.”

Originally posted on The Times of Israel.