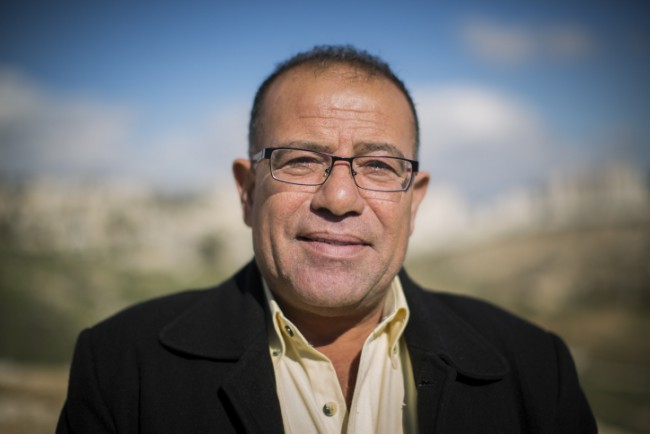 Bassem Eid was born in the Jordanian-occupied Old City in East Jerusalem, whose place of residence became the UNRWA refugee camp of Shuafat. Bassem Eid spent the first 33 years of his life in Shuafat.

He rose to prominence during the first Intifada, the Palestinian uprising, as a senior field researcher for B’Tselem, the Israeli Information Center for Human Rights in the Occupied Territories. In 1996, he founded the East Jerusalem-based Palestinian Human Rights Monitoring Group.

I am disheartened and worried about the violence being perpetrated in Israel by my fellow Palestinians. This recent wave of violence started at the Al-Aqsa mosque, in East Jerusalem, and extended to the rest of East Jerusalem, to the West Bank, and then to all of Israel does not seem to have any positive consequences for the Palestinian.

My biggest worry is that we Palestinians appear to have no responsible leaders, neither in the Palestinian territories nor at the Knesset. Instead of calming the violence, these leaders are only fanning its flames.

This wave of violence will not help our ability to convince anyone, let alone Israelis, that we deserve a state. It will not help grow Palestinian civil society, which is badly needed if we are to ever be taken seriously as a peace partner. It will certainly not help the Palestinians’ economic situation. All that this “achieves” is to push Palestinians further back. Yet the leaders are content to preach hate then sit back and enjoy their financial perks while Palestinian society is crashing and burning.

In my view, the main negative consequence is that the violence creates mistrust.  Palestinian leaders are less trusted by Israeli politicians, but also perhaps more importantly, Israelis trust individual Palestinians less.  This means that Israeli politicians are less likely to trust Palestinian leaders to negotiate peace.  At the level of ordinary people, additional mistrust towards Palestinians means that Israelis are likely to elect politicians who are less interested in a two-state solution.  As a consequence, also, Israelis are more likely to implement harsh policies such as taking away right of residency, closing borders to Palestinian workers, and additional settlements construction.

I think the main cause for this cycle of violence is that some Palestinians feel they have nothing to lose, and that is directly due to poor Palestinian leaders that are unable to bring them economic and political independence.  Palestinian President Mahmud Abbas uses the settlements as an excuse to not negotiate with Israel which is totally ill-advised since the longer he waits to negotiate, the more there are settlements.  Many young Palestinians realize they are led by incompetent individuals and they envy the prosperity of Israel.  There is also an important aspect within Palestinian society of incitement towards Jews, a sort of hate culture that is nurtured by terrorists and corrupt politicians.  The ongoing violence is partly driven by this hate, and results in more hate.  For Palestinians and Israelis to reach peace, they must look at each other as human beings and understand each other better.  The added mistrust goes in the opposite direction.

Not surprisingly, Hamas is engaged in inciting violence . The IDF reported that Hassan Yousef, a co­founder of Hamas, is “actively instigating and inciting terrorism and publicly encouraging and praising the execution of attacks against Israelis.” This is expected from Hamas, unfortunately, but the problem does not stop at Hamas.

At the start of this wave of violence, President Abbas said “The Al-­Aqsa [Mosque] is ours… and they have no right to defile it with their filthy feet. […] We bless every drop of blood that has been spilled for Jerusalem, which is clean and pure blood, blood spilled for Allah, Allah willing”. What kind of responsible leader would make such anti-Semitic and violent statements? The only conclusion one can draw from this is that Abbas is out of control and undeserving of the title he holds. Americans have denounced his rhetoric and so has the United Nations Secretary General Ban Ki­-Moon who is not exactly known for his pro­-Israel bias.

But what can one expect from Abbas when his own party, the Fatah, claimed responsibility for one of the early acts of terror in this wave of violence? The Abdel Qader al­-Husseini Brigades, a group affiliated with ‘Fatah’s al-­Aqsa Martyrs’ Brigades stated, “With Allah’s help and in keeping with our right for resistance and our duty to sacred jihad, our forces … carried out a necessary action in which they fired on a car of occupying settlers that left the settlement of Itamar.” How can Palestinians hope for peace when their leading party is associated with such despicable violence?

However, sadly the incitement does not stop in the Palestinian territories. Even Arab representatives at the Israeli parliament (Knesset) are inciting Palestinians to engage in violence. These Arab representatives who are paid by the Israeli taxpayers, both Jews and Arabs, are doing the work of foreign extremists, not the work that is needed to help the Arabs who voted for them. Nazareth Mayor Ali Salem, an Israeli Arab, denounced them by saying, “I blame the leaders; they are destroying our future, they are destroying coexistence. […] We need to find a way to live together. We cannot fight like this. We are damaging ourselves.”

Do our leaders not understand that only cooperation and peaceful coexistence will help our goal of economic prosperity and self-determination? Or are they so invested in doing the work of foreign Islamists, such as the Iranian regime, that they have totally lost any sense of what is good for the Palestinians?

But now is not the time to be discouraged. Despite our total failure of leadership at all levels, I call on Palestinians to rise above the shortsightedness and pettiness of our leaders and to call for calm among their families, neighborhoods, and communities. When there is failure at the top, it is time for the people to lead the way.