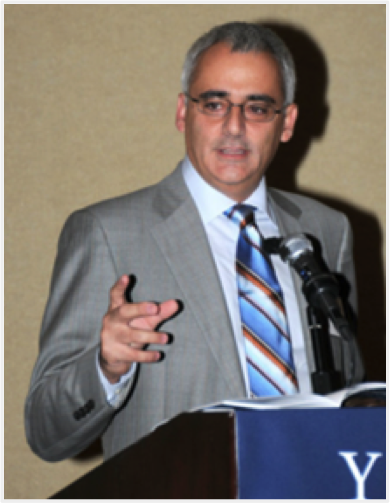 The 2020 Youth for Palestine Conference is taking place from January 25-26 at the University of Michigan Ann Arbor. The conference will be hosted by Midwest Students for Justice in Palestine (Midwest SJP), Palestinian Youth Movement (PYM) and Students Allied for Freedom and Equality (SAFE). The conference is also being sponsored by the American Muslims for Palestine (AMP), an organization described by the Anti-Defamation League as “the leading organization providing anti-Zionist training and education to students and Muslim community organizations in the country… AMP seeks to delegitimize and demonize the Jewish state. Its materials are prominently featured at its events and conferences, in its publications and through materials available on its website.”[1] As Natan Sharansky has famously demonstrated, the delegitimization and demonization of the Jewish State is a clear and common manifestation of antisemitism.[2] Donations to support the conference are being made available through a GoFundMe campaign. In addition, one of the organizations that will be hosted at the conference is Samidoun Palestinian Prisoner Solidarity Network, an overtly antisemitic organization dedicated to the support of terrorist attacks on Israelis.[3]

National Students for Justice in Palestine (NSJP) serves as the unifying umbrella organization for numerous Palestinian student organizations across the United States.[4] In October 2019, the Institute for the Study of Global Antisemitism (ISGAP) revealed how NSJP had engaged in overt antisemitic statements and demonstrated support for violence and terror during their annual conferences and on social media. According to the ISGAP Report, individuals working for NSJP Chapters and speakers at its events and panels have also made such expressions of antisemitism.[5] Importantly, during the last NSJP conference hosted this November at the University of Minnesota, NSJP glorified Ahmed Saadat, the Secretary-General of the Popular Front for the Liberation of Palestine {PFLP), which the United States has officially deemed a terrorist organization.[6] Saadat is currently serving a sentence in an Israeli prison for his involvement in assassinations and other terror activities specifically targeting Jews.

In January 2020 the United States Department of Education opened an investigation into the University of California Los Angeles for possible discrimination against Jewish students as a group after the university hosted the National SJP conference.[7] This action was based largely on the recent Executive Order signed by President Trump that ensures Jewish students and faculty protection by Article VI of the Civil Rights Act. The context for the creation and implementation of the Executive Order is a significant increase in antisemitism, including verbal and physical attacks on Jewish students and faculty in universities and colleges in much of the United States. As demonstrated in the October 2019 ISGAP Report on the NSJP, antisemitism on campus is inflamed by organizations such as National Students for Justice in Palestine, which has more than 200 chapters on university campuses throughout the U.S. Due to the Executive Order, it finally appears that universities that permit or enable antisemitism will most likely to be held accountable.

Palestinian Youth Movement (PYM), is an international movement of young Palestinians,[8] that has justified terror attacks, in addition to supporting U.S.-designated terror organizations and their leadership.[9] Also, PYM has repeatedly called for violence and aggression against Israel and for the kidnapping of Israeli soldiers (Click here to see the video). 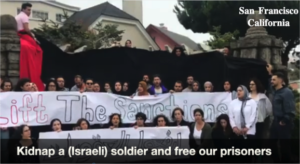 Moreover, it endorses collaboration with terror-affiliated organizations.[10] The PYM’s problematic activities and record of supporting violence and terror led to a Toronto church canceling PYM’s event due to its “glorification of terrorists and murderers” in June 2019.

American Muslims for Palestine (AMP) officially endorses the Boycott, Divest, Sanction (BDS) movement and plays a role in the BDS-arena in the United States. AMP organizes and participates in boycott campaigns, helps pro-BDS organizations on campus to procure grants, distribute materials and invite speakers. It also hosts an annual Palestine conference that often includes sessions on BDS.[11] Dr. Omar Barghouti, the founder of BDS, in a 2014 lecture at the University of California, Riverside, engaged in incitement against the Jewish people when invoking two ancient antisemitic accusations. Barghouti reiterated the blood libel, asserting that Israeli soldiers were “hunting children”; he also echoed the global Jewish conspiracy canard, accusing “Israel and its lobby groups” of controlling the U.S. Congress and the media. Incredibly, official course credits were offered to Riverside students for attending the Social Forum in eight different university courses (BDS Movement, “Palestinian BDS National Committee”, accessed 04/18).[12]

Samidoun Palestinian Prisoner Solidarity Network is a proxy of the PFLP.[13] Samidoun’s coordinator,[14] Khaled Barakat, is a senior PFLP member[15] and heads the PFLP’s Foreign Operations Department.[16] He and his wife Charlotte Kates, Samidoun’s International coordinator[17] and PFLP member,[18] uses Samidoun as a platform to promote PFLP’s agenda, ideas and content internationally. The majority of Samidoun’s activities are organized in support of the PFLP and convicted terrorists.[19] In addition, other leaders of Samidoun are also PFLP members.[20]

The keynote speaker at the conference is Hatem Bazian, one of the original founders of NSJP.[21] Bazian has been involved with various organizations that have ties to terrorism[22] and engages in overt antisemitic rhetoric.[23] Bazian has been quoted when he spoke at the American Muslim Alliance conference in May 1999, in Santa Clara, California, promoting the Islamic State of Palestine. Excerpts from the quote read, “‘In the Hadith [al-Bukhari, no. 3,593], the Day of Judgment will never happen until you fight the Jews… and the stones will say, ‘Oh Muslim, there is a Jew hiding behind me. Come and kill him!’”[24]

On the second day of the Michigan conference, there will be a “March Against Imperialism”. The march focuses on U.S. militarism not only in the typical arena of which SJP operates but also on “Iraq, Iran, Yemen, Palestine, Korea and much more”.[25] This march demonstrates how the conference uses “intersectionality” to gain support. The uses of “intersectionality” are a tactical ploy designed to demonize Israel and the Jewish people and thus associate them with various forms of evil. It is designed to declare not that all Jews are evil but rather that all evil is Jewish. Therefore, the antisemitic essence of the Youth for Palestine Conference becomes not just an unpleasant political necessity but a moral imperative: if you do not support their blatantly antisemitic agenda, then you too, are by definition morally bankrupt.

How much longer will antisemitism be tolerated on our campuses? What is the damage of inaction as more students across the nation are being exposed to this oldest of hatreds?