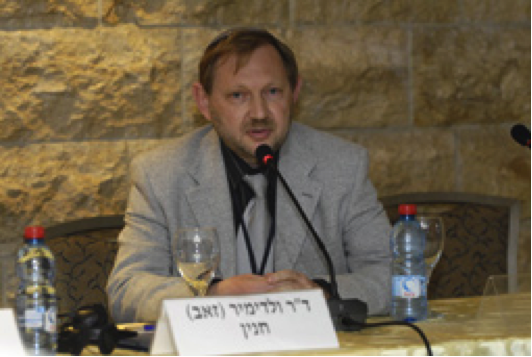 Dr. Vladimir (Ze’ev) Khanin currently serves as Chief Scientist (Senior Adviser to Minister on Research and Strategic Planning) of the Israeli Ministry of Immigrant Absorption. He is also Associate Professor, Dept. of Political and Middle Eastern Studies at Ariel University of Samaria and lectures on Political Studies at Bar-Ilan University, Israel.
Among Khanin’s academic publications are: Documents on Ukrainian Jewish Identity and Emigration (London, 2004); “Russian” Israelis at “Home” and “Abroad”: Migration, Identity and Culture (Ramat-Gan, 2011); Post-Soviet Jewish Youth (Moscow and Ramat-Gan, 2013); Political Party Systems and Electoral Trends in Israel of the Early 21st Century (Moscow, 2014); Joining the Jewish Collective: Formalizing the Jewish Status of Repatriates from the Former USSR of non-Jewish and Mixed Origin in Israel (Jerusalem, 2014), “The Third Israel”: Russian-speaking Community and Politics in the Contemporary Jewish State (Moscow, 2015)

What is the government policy today vis-a-vis the still quite substantial Jewish communities in two major post soviet republics, the Russian Federation and Ukraine? Did state antisemitism, once abolished, cause antisemitism to disappear or is there something in the Russian public and political culture which threatens to make antisemitism surface once again?

In the post-Soviet space, according to various estimates, there are between seven hundred thousand to one million people affiliated with the Jewish community, or who identify as having Jewish roots. This is a substantial number, making post-soviet space– including Russia– the first or second largest community in the Old World, besides Israel. The questions at issue thus have many practical implications.

Contemporary Russian policy is a combination of three narratives, or three political traditions: The Czarist, before the Bolshevik revolution in 1917. The second is the Soviet Narrative, or soviet political culture. And the third, the Western Liberal Narrative and western liberal political culture, was adopted by Russia after the destruction of the communist regime and dispersion of the Soviet Union.

Each stream has its own antisemitic narrative and tradition. In Czarist Russia, the Pale of Settlement, official government antisemitism was based on the discrimination of Jews vis-a-vis their religious background. The Soviet antisemitic tradition was based much more on ethnic antisemitism and government policy, searching for an internal enemy which was more pronounced at the end of the Stalinist era and especially at the end of the soviet period in general. The major point was official Soviet antisemitism– discrimination of Jews in terms of job opportunities, education, career advancement, distribution of social goods, and more. This did not prevent Jews from achieving success and becoming, for many, part of the local Soviet middle class under Soviet terms, even if the official government policy was antisemitic.

The third stream, the Western liberal narrative, ought to have little to do with antisemitism since official state antisemitism was abolished in March 1990, marked by an official decision to stop antisemitic propaganda and discrimination. Subsequently, it was believed that without state support social antisemitism would disappear, as well. This never happened. Indeed, the Western liberal model of political, social and cultural thinking also included some antisemitic sentiment, both imported from the West. Thus, new elements of the Western liberal narrative could be detected in the Russian contemporary political culture. Thus, there still exist forms of contemporary antisemitism (meaning political antisemitism) even in government, which uses the Jew for political needs and interests, including the conflicts between various political groups, both within the country and between the countries. For instance, the antisemitic card is quite successfully played in the contemporary Russian-Ukrainian conflict concerning the crisis in Eastern Ukraine and in new social media online. These constitute various new forms of societal religious antisemitism which is quite new. This antisemitism was not very developed in the Soviet period since religion was not a part of the official establishment.

In spite of the above, the post-Soviet space is still much less antisemitic than contemporary Europe. Jews still feel relatively secure in terms of their political status and certainly much more secure than previously.

Indeed, last year in Russia there were 30 registered antisemitic events. This number has consistently decreased from 99 in 2013 to 77 in 2014 and 31 in 2015. This compares favorably to the number of antisemitic events in Belgium, France, and some other European countries. Acts of antisemitic vandalism of Jewish cemeteries, synagogues, community centers, schools, kindergartens and monuments commemorating victims of the Holocaust is between ten to twelve.

In Ukraine, more accurate data is available and demonstrate that antisemitic acts had been on the decrease since 2007 until the recent war between Russia and Ukraine. It is uncertain whether the vandalism of Jewish cemeteries occurred because they were Jewish or whether this was due to the fact that people were looking for the place to express their understanding of the current situation. Yet, it appears that despite the quite difficult political, social, and economic situation there, antisemitism and xenophobia is relatively low in these countries.

There are a number of reasons for this. Firstly, in many FSU states Jewish communities decreased dramatically and thus the interface decreased. Day to day interactions between Jews and non-Jews is not as substantial as it was in the Soviet period. The Jews who stayed are much more integrated, even assimilated, in local society in all terms. Many behave as Russians, speak as Russians, eat as Russians, and do what most of the other groups of the population do. Thus, with the decrease of the Jewish community, antisemitic activity also decreased.

Secondly, Jews today as the major enemy have been replaced in the public discourse by other groups such as Chechens and Dagestanis, the last considered by many Slavs to be the major enemy or challenge for Russian identity, stability and status of the Slavic populations. The substantial Chechen communities are much more visible in Russian population centers, like Moscow or Ukraine and are a more convenient, immediate adversary for expressing xenophobic sentiment. An overwhelming number of the blue collar work in Moscow is done by migrants from Soviet republics of the former Soviet Union. Jews became much less attractive as an address for this xenophobia.

To this, one can add that the current political situation is much more imperative for Russian society than looking for an internal enemy. At the moment, there are quite a number of so-called external enemies—that is, the West. Russia is attempting to return to the status of superpower under the presidency of Vladimir Putin. Propaganda, public discourse and public opinion have a noted anti-western, especially anti-American accent. With this external enemy, there is no need for an internal enemy. Official government policy– if not pro-semitic, is not antisemitic. Public opinion has seen quite a number of representable Jews, or court Jews, in his inner circle. The government does not appear interested in making Jews the enemy when real enemies exist outside the country.

Ukraine has its own external enemy– imperial Russia. Ukrainians believe that the current situation in Ukraine is inspired by renewed Russian imperialism. Society needs all ethnic and religious groups in this war against imperialist aspirations and interests of Moscow, including Jews. Thus, Ukrainians do not perceive the Jews to be an enemy.

Russia has the biggest Muslim minority in Europe with up to 20 million Russian citizens, according to different estimates. These Muslims are much more ethnic than religious. For this group, antisemitism is not as important as one would expect especially in comparison to what one sees in Central and Western Europe. Many of these groups have not adopted the anti-Zionist, anti-Israel sentiment apparent within the Muslim communities in Europe and in the Middle East.

Indeed, last year a Muslim cleric was convicted of antisemitic propaganda for the first time. Though this never occurred in the 1990s, it is more of a trend today. The government was not interested in this issue until it crossed the red line. In some autonomous Muslim areas, such as in the Volga region, this is a more pronounced, imported antisemitism from Saudi Arabia, Qatar and Turkey. The government considers this a challenge and threat to stability.

Media antisemitism today is especially apparent in the new forms of the social media where antisemitic propaganda and incitement towards Jews is quite substantial. In 2015 alone, Russian authorities removed content from more than 4,500 internet sites and blocked 800 sites, including 160 that raise funds and recruit for terrorist organizations including Dae’sh. These incorporate the promotion of negative public Jewish stereotypes, such as dual loyalty and Holocaust revisionism which is a new phenomenon (given that the former Soviet government rejected a specifically Jewish character to this tragedy).

Although the Kremlin is not antisemitic the local government and authorities are quite ready to play this card. Indeed, there exist antisemitic radical left movements trying to play this Jewish card in order to blackmail political enemies. There are widespread identified antisemitic stereotypes which still exist. Many still believe, for example, that Jews rule the world.

In conclusion, a decrease of state antisemitism and antisemitic violence does not mean that societal antisemitism has disappeared. We are still able to identify between 8-10% who exhibit anti-Jewish xenophobia, a sort of dormant antisemitism. If the government becomes interested in playing this card, the current level of antisemitism could rise significantly.