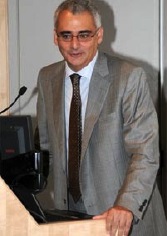 Dr. Charles Asher Small is the Executive Director of the Institute for the Study of Global Antisemitism and Policy (ISGAP). He is a Visiting Professor at the Moshe Dayan Centre Middle Eastern and African Studies, Tel Aviv University.

On Sunday January 17th, 2016 Pope Francis made his first visit as Pontiff to the Great Synagogue in Rome. This was a significant event, the third such visit by a Pontiff to the Great Synagogue. Importantly, it followed on the heels of the October commemoration of the 50th anniversary of Nostra Aetate, where the Pontiff issued a definitive statement against both classic and contemporary antisemitism. In his address, the Pope stated: “To attack Jews is antisemitism, but an outright attack on the State of Israel is also antisemitism.” As the scholar Kevin Madigan noted, this statement constitutes a fundamental reversal of Papal policy as set against the backdrop of centuries of theological anti-Judaism, opposition to Zionism and to notions of Jewish self-determination in their homeland. 1

This was not the Pope’s first pronouncement against antisemitism. Addressing European antisemitism during a meeting with the Conference of the European Rabbis (CER) last April, he asserted: “The antisemitic tendencies and certain acts of hatred and violence in Europe are of concern. Every Christian cannot but be firm in the condemnation of all forms of antisemitism”.

An ISGAP delegation had the privilege of a private audience with the Pope at the historic meeting at the Great Synagogue. In an ISGAP Declaration on antisemitism prepared and submitted to the Pope, ISGAP noted that those forces maligning the “Jew,” the “Zionist,” or the “Israeli” are also committing horrific acts of violence and hate against Christians, religious minorities, women, moderates and “others”. Indeed, the Iranian Regime, which openly calls for the annihilation of the Jewish State of Israel and the Jewish People, is directly and indirectly responsible for the support of much of the international terror throughout the world. The Iranian Regime is one of the leading countries in the world in the number of executions, persecution of minorities and incitement to genocide. This is to be expected from the world’s leading state sponsor of terrorism.

Given these important declarations, taking place in the context of the alarming rise of contemporary antisemitism throughout Europe, it is troubling that the Pope would welcome Iranian President Hassan Rouhani to the Vatican. The welcome of a representative of a Regime that is leading the world in Holocaust denial and openly calls for the annihilation of the Jewish people sends the moral and political message that incitement to genocide will once again be tolerated in the very place that the Holocaust occurred seven decades ago. It is less courageous to denounce antisemitism when speaking to a conference of rabbis or within a synagogue then it is to do it publicly in the presence of a representative of the Iranian Revolutionary Regime.   The Vatican has been remiss.

Effective and honest dialogue is only possible with those who respect the ‘Other’. The Iranian regime openly mocks such dialogue. In the two years since President Rouhani assumed office, the climate for religious freedom in Iran remains dire, particularly for religious minority communities, including Baha’is, Sufi Muslims, dissenting Shi’a and Sunni Muslims and Christians, who continue to be arrested.

This year marks the normalization of European and international relations with a regime that openly denies the Holocaust. Indeed, this week Iran acknowledged that it has already received more then 100 billion dollars as sanctions are lifted.   In the United States, members of the Obama Administration, including Secretary of State Kerry, admit freely that some of the funds will likely end up in the hands of international terrorists.

In Europe, the Iranian President met with French officials on Holocaust Memorial Day, a day the Iranian regime marked with an official Holocaust denial video and with the announcement of another Holocaust Denial Cartoons Contest, expected to attract participants from 50 countries around the world. The announcement reflects a core ideological commitment to global incitement to genocidal antisemitism.

The failure to confront this ideology has resulted in the failure to repel the forces of barbarism and terror throughout much of the world. It is for this very reason that the Vatican’s welcoming of Rouhani, and the French and Italian formal hosting of Rouhani to sign major trade deals and to formally lift sanctions, is dangerous.

The Vatican was in a position to speak with moral clarity, and should have stated publicly to Rouhani what was stated at the commemoration of the Nostra Aetate in October and to the conference of European rabbis last April: Iran must abandon its state policy of antisemitism and its oppression of non-Muslims. If Iran refuses to do that, and if European leaders and the Vatican do not insist on that, the setting aside of democratic principles in favor of expediency will bring a heavy cost to Europeans, Iranians, all in the Middle East, including Christians.