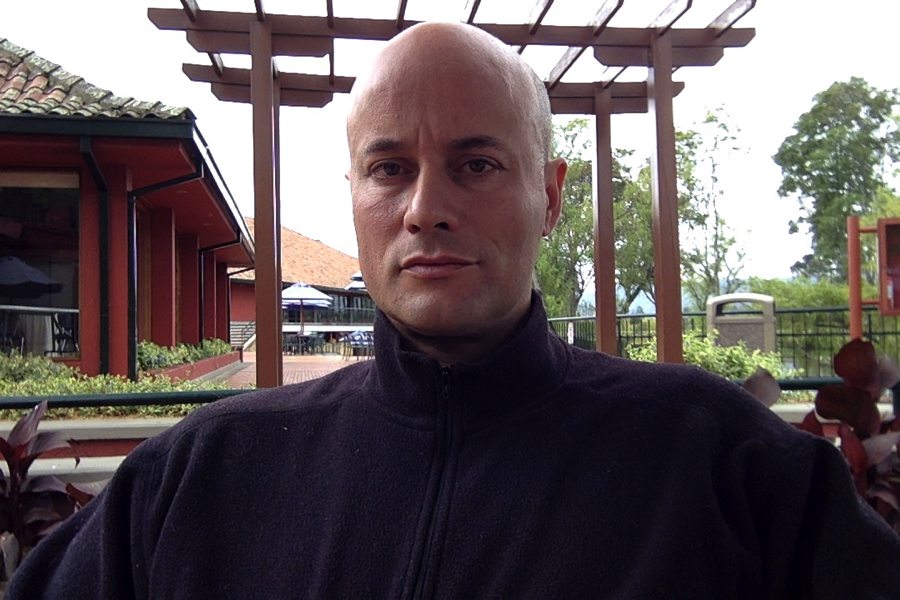 What is known in English as Israel Apartheid Week (IAW) has made it to Colombia in the form of the Semana contra el Apartheid Israelí. The “week” consisted of a 4 hour session on April, Friday 22, at a public university in Bogotá, featuring Palestinian, South African, Brazilian and Colombian speakers, and a 4 hour cultural event the next day, featuring music and poetry. In continental terms, it was preceded by the launch of a BDS campaign in Chile at the Universidad de Chile, which included five days of sessions and meetings (April 11-15).

I learned about the event in Colombia from one the country’s leading dailies, El Espectador (The Spectator), in which on Saturday, April 23, 2016, there appeared a brief interview with Kwara Kekana, a young BDS activist from South Africa, who was visiting Colombia to participate in the event.[1] No doubt having a Black activist from the country that actually invented and implemented real, historical apartheid (an Afrikaans term meaning “separateness”) gives the impossibly self-righteous Israeli “Apartheid” Week the appearance of a moral ballast that obviates the need for even a minimal skepticism regarding its outlandish accusations directed at Israel.

In the interview, Kekana opines that there are similarities between what is happening in Israel today and what used to happen in South Africa before 1994. This is, of course, the reductive logic employed by BDS and IAW to short-circuit critical thought and reflection, and win adherents. Everyone’s against apartheid—or should be, right? But what’s that got to do with Israel, a genuine multicultual country where Arabs and Jews live together—sharing buses, universities, restaurants, seats in an elected government, positions in a judicial system, etc.—not apart?

Indeed, the editors of the newspaper were clear that Kekana was expressing “her vision” of the conflict. They had the good sense to use scare quotes in their headline—“apartheid israelí”—and in the questions they put to Kekana they demonstrated commendable journalistic integrity, at times. In one of them, they even prompted her to reflect on the “grandes diferencias” (major differences) between the two conflicts. The prompt, however—as might be expected—was ignored by the activist interviewee.

On the other hand, Colombia Informa, an avowedly non-neutral news agency dedicated to “making visible the struggles for a just and egalitarian society,”[2] pre-reported on the event—billing it as one which would familiarize people with “the situation of segregation that the Palestinian people suffer.”[3] It also reported that the Colombian Jewish community wrote a letter of protest to the Dean of the venue for the event, a public university in Bogotá. This letter prompted at least one further letter to the Dean, from the Boston chapter of the so-called Jewish Voice for Peace (a small but notorious anti-Israel organization, widely known as a hate group), supporting Colombia’s IAW.[4]

Revealingly (if unsurprisingly), the Colombian Communist Party, the third oldest political party in Colombia, supported the initiative—said by the CCP to be part of a series of acts “rejecting the disgusting practice of apartheid by Israel against Palestine.”[5] With friends like this, it should be clear that IAW/BDS has as much future as Communism in Latin America (or elsewhere).

But the absurdity of the anti-Israel rhetoric should not distract us from the main point. For what needs to be highlighted in all this is the facility with which Israel’s justified methods of protecting itself from ongoing terrorism are simply erased from view in these discussions. The State of Israel takes the kinds of steps that any responsible state would take to defend its citizens, but they are all “rebranded” as aggression—which is the purest Orwellianism on the part of IAW/BDS. It is as if the plight of the Palestinians has nothing to do with the leadership and acts of terrorist groups like Hamas, committed to the destruction of Israel and the establishment of an Islamist state in the region—acts of violence and a program against which the Jewish state stands firmly on the front lines, defending civilization against barbarism.[6]

Moreover, there is no attempt to shed any light on the complexities of the situation. In the propagandistic discourse IAW foments, there are just the bad, oppressive Israelis (or “the Jews”) and the good, oppressed Palestinians. There is no discussion of the constant rejection of a two state solution, from 1948 onwards to the present day, by Palestinian leadership; no reminders about the war launched against Israel at Independence, nor the wars that followed waged by coalitions of Arab states and armies determined to extirpate the Jewish presence in the region and its guarantor, the State of Israel.

The pre-coverage of the IAW in Colombia by Colombia Informa in fact reveals clearly what is going on. Not only in Bogota but wherever what is alternatively and quite accurately known as “Hate Week” takes root—from Columbia University to Colombia, Latin America—we see the same kind of mendacious excuses for calumny: “The use of the word ‘apartheid’ to describe the actions of Israel is controversial because it problematizes the image of the ‘only democracy in the Middle East,’ making visible the systematic violations of the human rights of the Palestinian people,” IAW’s public relations team asserts.[7] This is far from the whole story, however!

Yes, the IAW smear campaign certainly does “problematize” the image of Israel—and that is the premeditated rhetorical point. But rather than make visible “systematic violations,” it actually invents them, exaggerates them, turns whatever missteps Israel makes (nobody is perfect, especially in the face of ongoing organizational commitment to your extinction) into acts equivalent to the purposeful actions of the racist, undemocratic, and finally execrable apartheid government of South Africa before 1994. Equally important, again, is the work such a word does to make invisible the existential threat that Israel has endured and endures on a daily basis—from not only its neighbors and its neighbors’ neighbors, including Iran, but from individuals, for example those participating in the latest “stabbing intifada.” Israel’s actions in response to these real threats are ethical and justifiable.

To argue that the word “apartheid” is not an appropriate word to use to characterize the actions of Israel vis-a-vis the Palestinians, that it is an instance of a hostile rhetoric designed to inflame passions and delegitimize a legitimate state, is of course correct; but it is also a bit beside the point, I am suggesting. What is at stake here is a choice between different and opposed visions and understandings of the world we co-inhabit, of the ways of being in and sharing the world: democracy and self-determination, or terror and extermination. The logic of IAW is the latter. Israel (and not only Israel, but the West in general) incarnates the former. We should stand with Israel.

[6] See Gabriel Noah Brahm, “There is a Clash of Civilizations: An Interview with Benny Morris,” in Fathom (Autumn 2015), http://fathomjournal.org/there-is-a-clash-of-civilisations-an-interview-with-benny-morris/