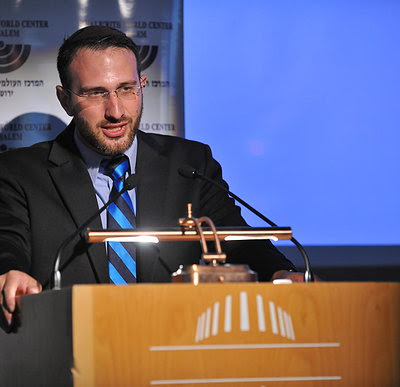 Samuel Sokol was until recently the Jewish World correspondent for the Jerusalem Post. His reporting on the Jewish IDPs of revolutionary Ukraine garnered the 2015 B’nai B’rith World Center Award for Journalism Recognizing Excellence in Diaspora Reportaģe. He is currently writing a book on Ukrainian anti-Semitism and Russian propaganda.

“Glory to the nation! Death to the enemies!”

This chant was heard across Kiev’s central Maidan Square in late 2013 as thousands of Ukrainians massed in protest against the corruption and brutality Viktor Yanukovych, their pro-Russian President.

It was a chilling slogan, bearing harsh connotations for those who understood its identification with the Ukrainian nationalist movement of the early to mid-twentieth century, especially the descendants of their Jewish victims.

Carrying the red and black flags of the Ukrainian Insurgent Army -which murdered thousands of Jews in western Ukraine during the Holocaust[1]– as well as those of the Svoboda party (the UPA’s self-proclaimed spiritual heir) those screaming the ultra-nationalist protesters represented a minority of those who had come out to vent their rage, albeit a disproportionately vocal and violent one.

During the years immediately prior to the conflagration which would engulf the Ukrainian capital and split the country in two, Ukrainian Jews had become increasingly worried about the rise of Svoboda. Proudly anti-Semitic, the party had a history of harassing Jews and had been declared a neo-Nazi faction by both local community leaders and the World Jewish Congress.

Initially known as the Social-National Part of Ukraine, the part that would become Svoboda was a fringe movement for much of its history, only coming to prominence following elections in 2012 when it won 36 out of 450 seats in the Verkhovna Rada, Ukraine’s parliament.

Party cadres, alongside members of the newly formed ultra-nationalist Pravy Sector (Right Sector) coalition, provided most of the fighters who took part in violent clashes with riot police and the Titushky[2], hired thugs used by the government against the Maidan activists.

During the early stages of the protests, several signs pointed to the possibility of an upswing in nationalist sentiment that could prove dangerous to Kiev’s Jewish population. 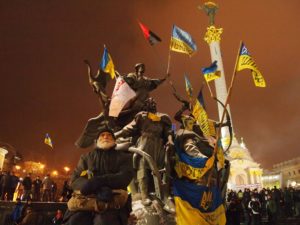 The red and black flag of UPA flying in the Maidan. Such flags can still be purchased in the square. 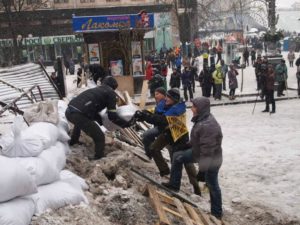 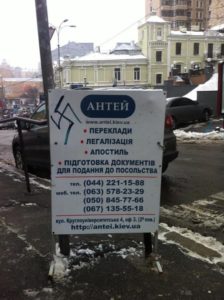 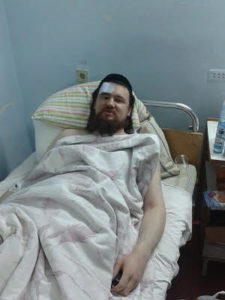 Yeshiva student Dov Ber Glickman was stabbed during the Maidan.

[1] John‐Paul Himka, The Ukrainian Insurgent Army and the Holocaust, Paper prepared for the forty‐first national convention of the American Association for the Advancement of Slavic Studies, Boston, 12‐15 November 2009

[2] For an at length explanation of the origins of the term, see Kurkov, Andreĭ. Ukraine Diaries: Dispatches from Kiev. London: Random House, 2014. Print.