International Human Rights Lawyer David Matas will be give a talk on the topic of “Antisemitism and the Peace Process.” 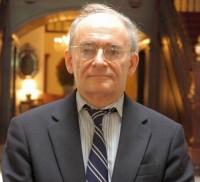 David Matas is an immigration, refugee and international human rights lawyer in private practice in Winnipeg since 1973. For B’nai Brith Canada he has been Chair of the League for Human Rights from 1983 to 85, Senior Honorary Counsel from 1989 to the present, and Vice-President from 1996 to 1998. He has been a member of the Canadian Delegation to the Task Force for International Cooperation on Holocaust Education, Remembrance and Research in Stockholm in 2000, in Prague in 2007, and in Linz and Vienna both in 2008. David is the author or co-author of several books including Justice Delayed: Nazi War Criminals in Canada published by Summerhill Press, in 1987 written with Susan Charendoff; Closing the Doors: The Failure of Refugee Protection published by Summerhill Press in 1989 written with Ilana Simon; No More: The Battle Against Human Rights Violations published by Dundurn in 1994; Bloody Words: Hate and Free Speech published by Bain & Cox in 2000 and Aftershock: Anti-Zionism and Antisemitism, published by Dundurn in 2005. He was nominated for the Nobel Peace Prize in 2010.