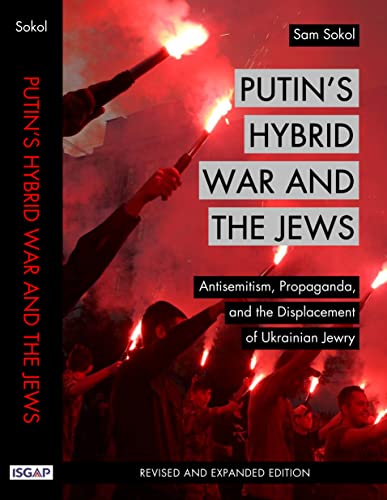 Based on journalist Sam Sokol’s on-the-ground reporting during the first years of the Donbas War, Putin’s Hybrid War and the Jews chronicles the collapse of Jewish life in the regions of eastern Ukraine occupied by Russian-backed separatist militias in 2014. Told through the eyes of refugees, politicians, soldiers, and aid workers, it is a rich account of both the ravages of armed conflict and the weaponization of antisemitism in modern hybrid warfare.

About the Publisher: The institute for the Study of Global Antisemitism and Policy (ISGAP) is committed to fighting antisemitism on the battlefield of ideas. ISGAP is dedicated to scholarly research into the origins, processes, and manifestations of global antisemitism and other forms of prejudice, including various forms of racism, as thy relate to policy in an age of globalization. On the basis of this examination of of antisemitism and policy, ISGAP disseminates analytical and scholarly materials to help combat hatred and promote understanding.