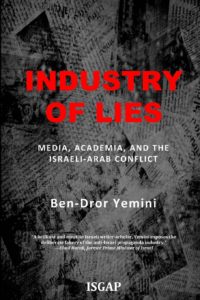 The Industry of Lies is one of the greatest frauds of recent decades – a fraud of historic, even epic, proportions. When almost half of all Europeans believe that Israel treats the Palestinians just like the Nazis treated the Jews, when leading politicians assert that the Arab-Israeli conflict is the central cause of violence in the world, and when prominent intellectuals argue that Israel is an apartheid state, the unfortunate reality is that the lies are winning.

As a result, Israel has become the devil incarnate in the eyes of many otherwise good and reasonable people – people who genuinely want to see peace but inadvertently contribute to the continuation of the Israeli-Arab conflict. The tragedy is that they are neither helping the Palestinians nor promoting agreement or reconciliation. Instead, they lend legitimacy to the fallacious claims of the most extreme activists, empowering not moderates but the worst of the radicals who have no interest in attaining peace.

Israel is not free from flaws. However, this book draws a clear distinction between legitimate criticism and the industry of lies that has emerged from two unlikely sources – the media and academia – undermining their reputation as bastions of truth and knowledge. Ben-Dror Yemini presents an in-depth analysis of the many inaccurate and malicious accusations leveled against Israel and refutes them one by one in this thought-provoking and well-researched volume that invites us to rethink the causes and consequences of the Israeli-Arab conflict.

Praise for Industry of Lies

“In a world where we’re trying to sort out the truth, the forgotten facts that Ben-Dror Yemini has assembled should be known by all those trying to resolve the Israel-Palestine conflict”
Robert Bernstein, former President of Random House and Founder of Human Rights Watch

“I am going to do something unconventional: recommend a book that excoriates me. Ben-Dror Yemini’s book is important, thorough, and thought-provoking”
Ari Shavit, journalist and Author of “My Promised Land”

“Ben-Dror Yemini is a critic of current Israeli policy. This book deserves a wide readership because it reveals the big and small lies that are actually an impediment to peace”
Professor Benny Morris, Author and Historian

“Ben-Dror Yemini belongs to a unique breed of Israeli scholars. This book should be read by all truth-seeking people”
Professor Amnon Rubinstein, former Israeli Minister of Education, Meretz