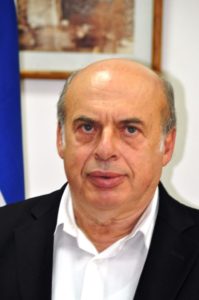 In 2003 Natan Sharansky famously developed a vital definition for the new antisemitism – the 3d test, to help us distinguish legitimate criticism of Israel from antisemitism. The first “D” is the test of demonization, the second – of double standards, the third – of delegitimization. This 3d principle was widely accepted by different organizations that fight antisemitism and was included in the international definition of antisemitism.

Natan Sharansky was born in 1948 in Donetsk, Ukraine. He was a spokesman for the human rights movement, a prisoner of conscience and leader in the struggle for the right of Soviet Jews to immigrate to Israel. Mr. Sharansky was a founding member of the Helsinki Group, which monitored violations of international agreements of different religious and national groups in the Soviet Union. He worked closely with Andrei Sakharov, the renowned Soviet human rights activist, and kept close contact with foreign media beyond the iron curtain.

In 1977, a Soviet newspaper alleged that Mr. Sharansky was collaborating with the CIA. Despite denials from every level of the U.S. Government, Mr. Sharansky was found guilty and sentenced to thirteen years in prison, including solitary confinement and hard labor. In the courtroom prior to the announcement of his verdict, Mr. Sharansky in a public statement said: “To the court I have nothing to say – to my wife and the Jewish people I say “Next Year in Jerusalem”. After nine years of imprisonment, due to an intense international campaign led by his wife Avital, Mr. Sharansky was released on February 11, 1986, emigrated to Israel, and arrived in Jerusalem on that very day.

Upon his arrival to Israel he became active in the integration of Soviet Jews and formed the Zionist Forum, an umbrella organization of former Soviet activist groups dedicated to helping new Israelis and educating the public about absorption issues. The final chapter of the historic struggle for the release of Soviet Jews was the historic rally of over 250,000 in 1987 during Gorbachev’s first visit in Washington of which Natan Sharansky was is the initiator and driving force.

In 1996, he established the Yisrael B’Aliyah party in order to accelerate the integration of new immigrants into Israeli society. He served in four successive Israeli governments as Minister and Deputy Prime Minister.

In 2018 he received the highest Israeli award – the Israel Prize for promoting Aliyah and the ingathering of the exiles.

He is also the author of three books: Fear No Evil, The Case for Democracy, and Defending Identity. He remains a champion of the right of all people to live in freedom and believes that the advancement of human rights is critical to peace and security around the world.