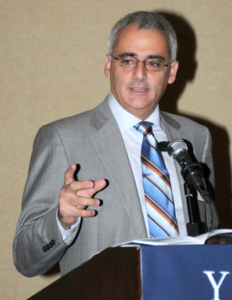 Dr. Charles Asher Small is the Director of ISGAP, and a Research Scholar at  St. Antony’s College, Oxford University.  He is also the Goldman Fellow at the Harold Hartog School of Government and Policy, and a Senior Research Fellow at the Moshe Dayan Centre for Middle East and African Studies, Tel Aviv University.  Previously, he was the Koret Distinguished Fellow, Hoover Institution, Stanford University.

Charles was the founding Director of the Yale Initiative for the Interdisciplinary Study of Antisemitism (YIISA), the first interdisciplinary research center on antisemitism at a North American university. At Yale he taught in the Political Science Department and the Program on Ethics, Politics and Economics, and ran a post-doctorate and graduate studies fellowship program at YIISA. He was also an Associate Professor and the Director of Urban Studies at Southern Connecticut State University (SCSU), as well as an Assistant Professor at Tel Aviv University in the Department of Geography. He lectured internationally and worked as a consultant and policy advisor in North America, Europe, Southern Africa, and the Middle East. Charles specializes in social and cultural theory, globalization and national identity, socio-cultural policy, social movements, and racism(s) – including antisemitism(s).