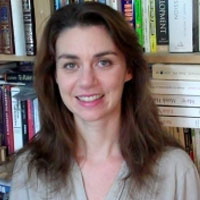 Dr. Stephanie Courouble Share graduated from the Contemporary History Studies, Faculty of History at the Denis Diderot University in Paris, France. Her Ph.D. dissertation (Paris, 2008, under the direction of Pr. Pierre Vidal-Naquet) dealt with a comparative analysis of Holocaust denial in several countries: France, England, Germany, and the United States (1946-1981). She is now working on publishing a book on Holocaust denial in French, with a subsequent English translation. Mixing history and sociology, the book compares the evolution of Holocaust denial since the end of World War II until today in major countries in order to observe its emergence and rise in several public spheres (the media, courts of law, political spheres, Internet). In addition to her fellowship at ISGAP, she is also a post-doctoral researcher abroad at the Institut d’histoire du temps présent/CNRS, Paris, France and an associate researcher at the Arnold and Leona Finkler Institute of Holocaust Research at Bar Ilan Univerisity, Israel. She also lectures on Holocaust denial at the International School for Holocaust Studies, Yad Vashem, and at the Université Populaire de Jérusalem.